Ethereum started the week strong, inching back to the $4,800 mark, but several long-lasting divergences are pointing to an upcoming correction.

At the end of last week, Ethereum Foundation transferred 20,000 Ethereum, worth roughly 9,5 billion to Kraken.

According to Colin Wu, who brought attention to the transaction, Ethereum Foundation made similar sales in the past, when the price was peaking.

David Iach noted that Ethereum Foundation currently owns 3% of the Ethereum that it used to own, selling most of it at prices below $10.

“The idea that it’s a top signal when they sell is highly idiotic,” concluded the popular crypto investor, dismissing the sale’s potential to be regarded as a price movement indicator.

The Ethereum Foundation used to own 11.9M ETH (which at today’s prices would be worth $55bn).

Now they own 97% less ETH because they sold most of it at prices below $10.

The idea that it’s a top signal when they sell is highly idi0tic. pic.twitter.com/DY3DhAmBt5

On Monday, over $6 billion worth of Ethereum was transferred to Kraken, adding to unease, even though all the funds were transferred from the exchange’s cold wallet.

It’s a pretty huge sum. The receiving exchange was #Kraken and they do have OTC for Ethereum. So yes, it’s a possibility. But honestly, IMO it is some kind of internal transactions. Nothing to worry about.

Santiment recently reported that Ethereum’s supply on exchanges dropped to 15,66%, while a year ago, this number sat at 23,29%.

According to the data platform, Ethereum moving to cold wallets for DeFi-related activity and ‘hodling’ can be interpreted as a sign for long-term price prospects.

😎 #Ethereum‘s supply on exchanges sits at 15.66%. One year ago, this number sat at 23.29%. It’s clear that more and more $ETH is moving safely to cold wallets for #DeFi-related activity and #hodling, an encouraging sign for long-term price prospects. https://t.co/WExhNKNmY6 pic.twitter.com/i0afax2U6l

Ethereum crossed a $4,800 mark on Wednesday, recording a new all-time high (ATH). It witnessed a price correction on the day, dropping as low as $4,485.

Following the ATH, Santiment’s analysis addressed some of the on-chain metrics which indicate that the price correction is near.

The analysis warned about network activity going down, despite the price pushing upwards. 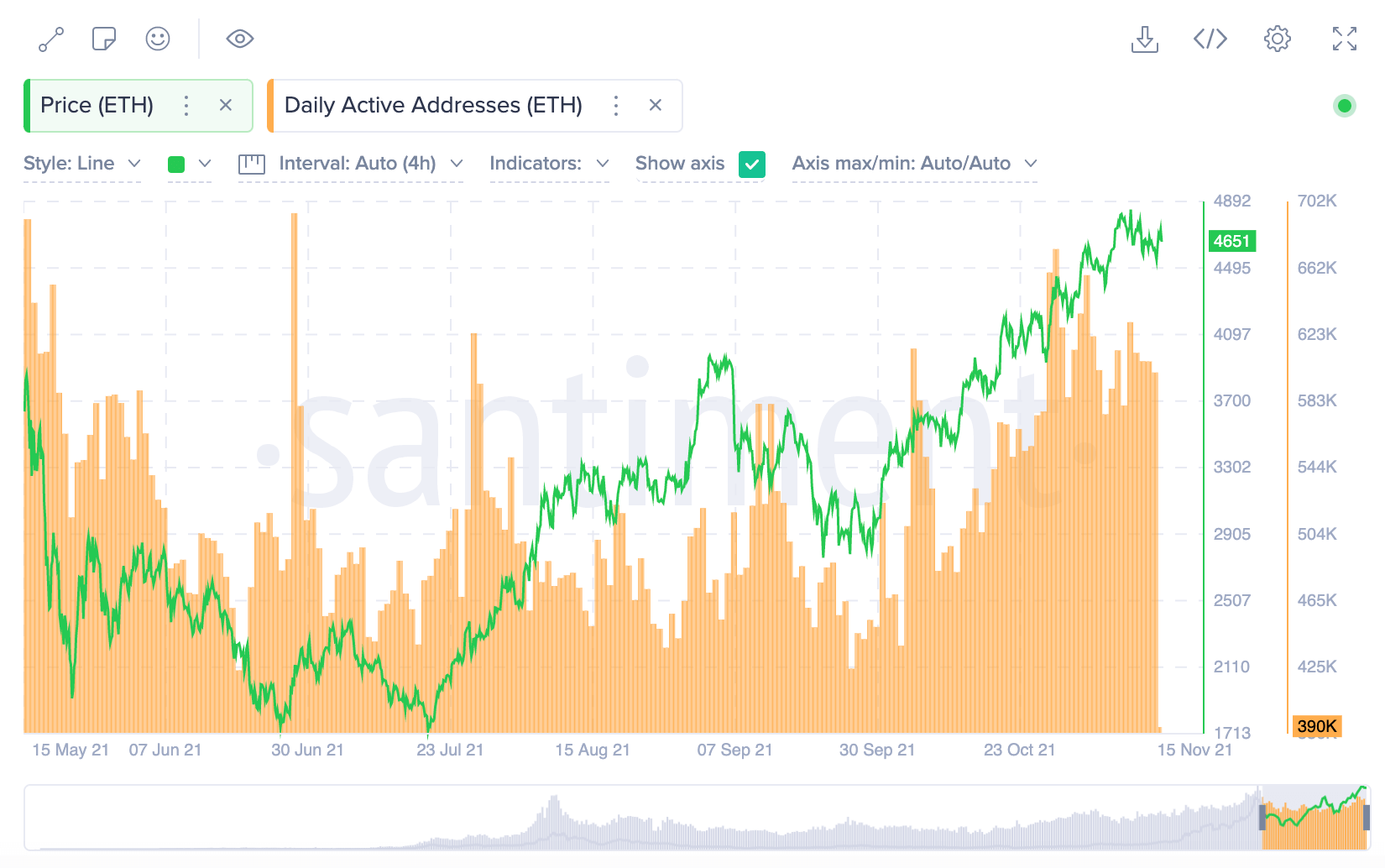 Ethereum’s daily active addresses, the main user participation indicator, has been in decline since late October, diverging from the price.

Additional bearish divergences were recorded in the case of daily trading volume and the network profit loss (NPL), as both metrics struggle to go up, despite the price increase.

“People are too relaxed to take profits even though ETH is going up (visible in NPL). There is a good chance they will be punished,” concluded the analysis.

To end on an optimistic note, Colin Wu recently pointed out that the “current amount of ETH burned by EIP1559 has exceeded the number of ETH held by miners.”

Such numbers are painting a bullish outcome for ETH, at least in the context of long-term price prospects.

Get an edge on the cryptoasset market

Access more crypto insights and context in every article as a paid member of CryptoSlate Edge.

How To Turn Unused Internet Bandwidth Into Cash?